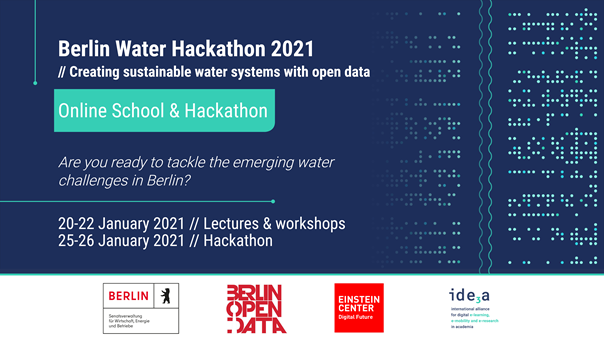 For the third school of this winter term the ide3a-project teamed up with Berlin Senate Department for Economics, Energy and Public Enterprises to conduct the “Berlin Water Hackathon 2021”, or as it is called for students from our partner universities the school “Smart Cities”.

While Berlin might not make international headlines as ‘a city on the verge of a water crisis’, the German capital – just like many others worldwide – is also predicted to face more and more water related challenges like extreme weather events in the near future. Increasingly frequent extreme rainfall events, summer droughts, and increased heat stress urge us to rethink the relationship between the city of Berlin and its urban water system. Understanding the complex interconnections between water and other critical infrastructures is key in this mission.

The ‘Berlin Water Hackathon 2021’ invites students and professionals from various disciplines to join forces and tackle some of these wicked water problems in a creative and collaborative manner. In addition to our partner students, people from the general public with an interest in this topic were invited, too.

The online event will kick off with 3 days of lectures and workshops, from January 20th-22nd, introducing the state of the art and hands-on case studies from Berlin and beyond. The second part of the event will comprise a 2-day hackathon, from January 25th -26th, supported by the Berlin Senate Department for Economics, Energy and Public Enterprises. The teams will work on one of three challenges that the Berlin water system is facing. The best team project will be awarded by a prestigious jury of experts!

The programme of the hackathon can be downloaded here.

Applications for ide3a scholarships 2021 are open